A punt gun is a type of extremely large shotgun used in the 19th and early 20th centuries for shooting large numbers of waterfowl for commercial harvesting operations. These weapons are characteristically too large for an individual to fire from the shoulder or often carry alone, but unlike artillery pieces, punt guns are able to be aimed and fired by a single person from a mount. In this case, the mount is typically a small watercraft (e.g. a punt). Many early models appear similar to over-sized versions of shoulder weapons of the time with full-length wooden stocks with a normal-sized shoulder stock. Most later variations do away with the full-length stock — especially more modern models — and have mounting hardware fixed to the gun to allow them to be fitted to a pintle.

Punt Gun Mop & Brush Set 2″ Dia. This is a bronze brush & mop set produces for a punt gun. Fot up to 2″ diameter. The bronze brush measures 9½” (24cm) long and the wool mop 8½” long. These were sets produced by the late Alan Myers and are of top quality. 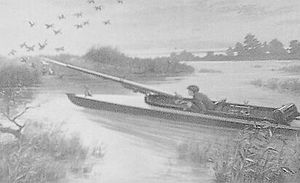