MIDWEST INDUSTRIES MARLIN 1895 HANDGUARD M-LOK. Tactical Upgrade That Makes Old School Cool Again
Why should the “modern sporting rifles” get all the accessory-mounting options? What about the original light, maneuverable, high-capacity carbine – the lever action? Midwest Industries has answered those questions with their Marlin M-LOK Handguard that provides a sturdy platform for mounting a light, laser, and just about any other tactical accessory on Marlin lever actions. The Marlin 1895 is still the carry gun of choice for folks operating in bear country, or anywhere else the AR-15’s .223 cartridge (even the AK’s 7.62×39) isn’t going to have enough persuading power to get the job done. The folks at MI made sure their Marlin M-LOK handguard is slender and lightweight, so it adds the bare minimum of bulk to your 1895, 1894, or 336 (see fitting note below). Installation is easy and requires no permanent modifications to the rifle, so you can return it to its original configuration any time. Machined 6061 T6 aluminum (like tactical AR handguards) Hardcoat anodized finish, matte black 13.625″ OAL x 1.64″ wide at widest point Weighs only 6 oz.! Fits rifles with a forend cap; will NOT fit rifles with a forward barrel band (see note below) The Marlin M-LOK handguard comes with a bolt-on 5-slot Picatinny rail section, so you can mount Picatinny accessories, too. The forward-mounted sling swivel stud is compatible with swivels for conventional hunting slings. Genuine new developments in the world of lever actions are rare these days – but here’s one that brings a big dose of extra versatility to an already exceptionally handy, versatile rifle. Brownells GunTech Note: The Midwest Industries Marlin M-LOK handguard fits Marlin 1895 (excluding the CB model), Marlin 1894, and 336 rifles with a cap at the forward end of the forearm.
DOES NOT fit rifles/carbines with a barrel band around the forearm and the barrel itself. 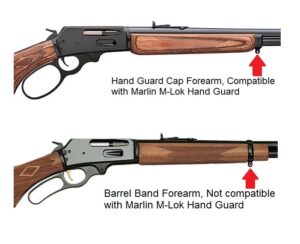